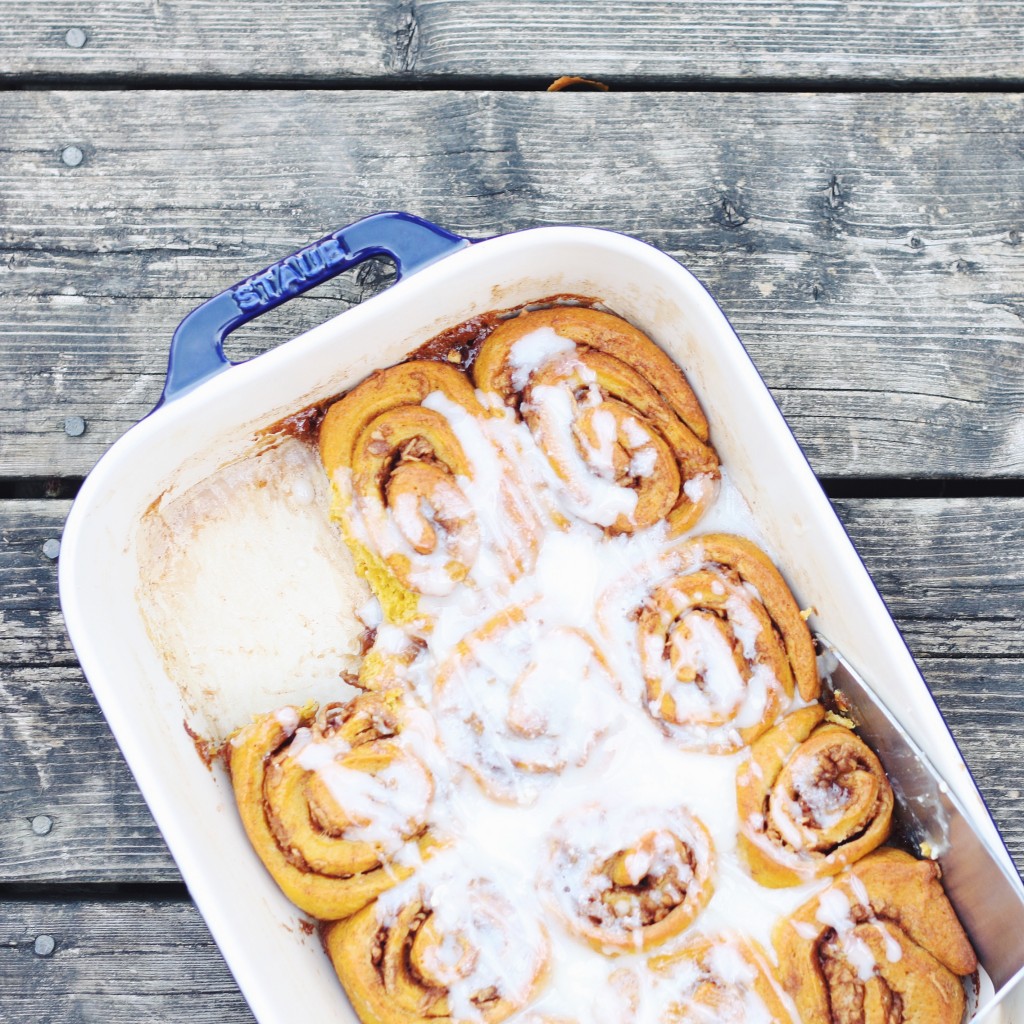 Firstly, I want to apologize for not posting any new recipes in a while.  I’ve been super busy but am going to try to continue posting on a more regular basis.

That being said, I wanted to try out a pumpkin recipe.  I also wanted to eat cinnamon rolls. So that’s how this happened.   I think this was a good place for me to try it out.  The rolls definitely had a pumpkin flavor, but it was subtle and not overpowering at all.  It also seemed to blend perfectly with the apple cinnamon filling.

These rolls would be perfect on any fall weekend, but I think would be especially good for a thanksgiving brunch. 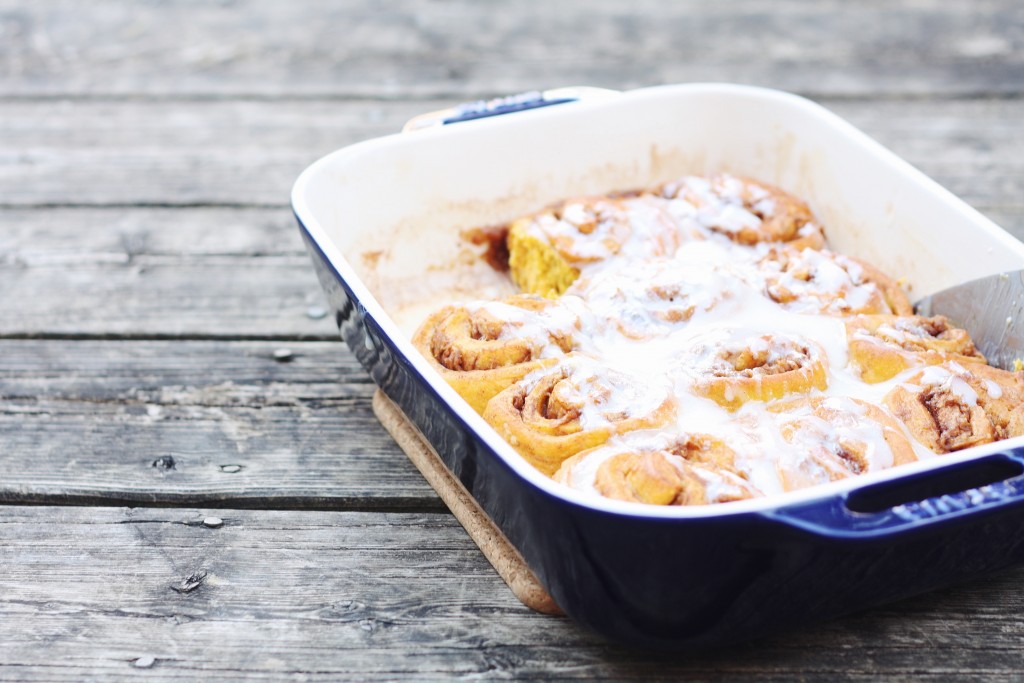 To make the dough, start by gently heating milk in a small saucepan (about 110°F) you want it to be warm, not hot. Turn off the heat and add in the yeast giving it a stir to dissolve.  Allow 5-10 minutes for the yeast to activate.  The milk should look foamy. If it’s not, the yeast may have gone bad. While the yeast is activating, melt the butter (1/4 cup) and allow it to cool slightly.

In the bowl of a stand mixer, combine the flour, sugar, salt, and spices.  Give it a quick stir to combine before adding the melted butter, egg, pumpkin and the milk/yeast mixture.  With the dough hook attached, mix on low for about 5 minutes stopping to scrape down the edges if necessary.

Add mixture to a large boil greased with oil and cover with plastic wrap.  Allow it to rest in warm place until doubled in size, this should take about an hour to an hour and a half.

When the dough is almost ready, prepare the filling. Start by peeking and grating the apples into a paper towel lined bowl.  Give the apples a bit of a squeeze in the paper towel to get rid of excess moisture. Combine the apples with brown sugar and cinnamon and stir to combine.  Melt the butter and set it aside for now.

Dump the dough onto a floured surface and dust the top with a sprinkle of more flour.  Roll out the dough into a large rectangle (I try to aim for 16″x12″ but it doesn’t need to be exact).  Brush on the melted butter in order to fully coat the dough and then top with the apple cinnamon mixture trying to spread it as evenly as possible.  From the long end, roll the dough into a tight cylinder and slice into individual buns (about 1 1/2″) Don’t worry if you lose a bit of filling, this step tends to be a little bit messy.  I got 12 large buns out of this, cutting into about 1 1/2 inch pieces give or take.  You can go smaller depending on how many rolls you want to get.

In a parchment paper lined baking pan (9″x11″), evenly place the rolls leaving a bit of space between them (don’t worry, they will continue to rise and expand while cooking so that there are no gaps).  Cover the pan with parchment and allow to rise for another 30 minutes before baking.

Preheat the oven to 350°F and bake for about 35 minutes or until golden brown and puffed up.  Keep an eye on them because the time will vary depending on your oven and the size of your rolls.

Prepare the frosting while the buns are baking by beating the cream cheese in a stand mixer with the paddle attachment.  Once it is fluffy, add in the powdered sugar and continue to beat on low while slowly adding the milk along with a splash of vanilla.  You can adjust the consistency by adding more milk to thin it out or more sugar to thicken it.

When the buns are ready you can choose to glaze them all right in the pan, or serve the icing separately.

What better way is there to start off your day that with a batch of warm cinnamon buns?  They seem like they can be a little intimidating to make but if you take your time, they’re actually pretty straightforward.  All the time you put into them will be totally worth it when they come out of the oven and are ready to be iced.  Not to mention they will make your kitchen smell amazing.  Be sure to make these cinnamon buns for your next lazy Sunday. Recipe below!